Boon & Up’s fabrics are created in the small rural town of Lawra in the far north of Ghana. Our hand-grown and carbon-neutral African cotton is woven on handlooms by women of the Dagaaba people, and our patterns are all based on a traditional template that mimics the feathers of the Guinea fowl. To complete the story, we have dyed all our cotton a range of colours that reference the hues that the local Dagaare people paint their huts and houses.

All our fabrics tell a story.

When a child is born in the Dagaare region the community will be called upon to provide a name. Deliberation will take a while as the baby’s character develops and weeks will pass before a suitable name is chosen. Annamala means ‘it shall be well’, and it’s the name of our Production Assistant’s new baby girl. This traditional pattern, originally based on the plumage of the guineafowl, is named in her honour.

See me see you

A villager, returning home after a trip away, will visit the more important members of the community with small gifts. Any traveller who forgets to greet fellow villagers will have issued a grave insult. The pink of this traditional pattern refers to the warmth and smiles of a greeting, the dark lines a reminder of the snubs and shuns a careless villager might incur.

Every Easter the people of our hometown of Lawra empty out onto the corn fields on the banks of the nearby River Volta for a three-day festival. It’s dry season so the blue brown river will have dried out to a trickle and fingers of yellow sandy riverbed serve as dancefloors for the partygoers.

Every April in northern Ghana rains begin to sweep across the scorched savannah, and the horizon is transformed as precious crops begin to re-emerge from the soil. The pattern of Blue Savannah depicts the sky as it is reflected in the streams, brooks and irrigation channels that pop up across the farmland.

After harvesting is done the farmers of the Dagaare region will burnt back the crops as they prepare their fields for the next farming season. As evening falls, ribbons of low flames scatter across the savannah creating a pattern of reds against the darks of the scorched earth.

This pattern depicts brown earthenware cauldrons (kudoog) as they sit atop glowing charcoal embers, while women create the daily meal from fermented maize and cassava. Groundnut stew, or perhaps wilted leaves, will often accompany the dish that will be eaten at the end of the day.

The Neem tree packs a variety of medicines into its frame. Boil the leaves to fight off the symptoms of malaria, scrape the bark to alleviate rheumatism. This traditional pattern focuses on the undulating surface of the trunk.

During the wet season, rain drills down from the skies and onto the corrugated metal roofs of houses in our hometown in rural northwest Ghana. ‘Raindrop Forest’ pattern depicts the savannah landscape as it is glimpsed from doorways, and through forests of raindrops.

Although our hometown in Ghana is a sixteen-hour bus trip to the nearest airport, when we look at the sky on a clear day we occasionally can see airplanes from Europe fly high in the sky as they make their way to the capital Accra. Our head weaver Grace points at the vapour trails as they score the sky and wistfully says ‘one day I fly in the aeroplane’.

Madam Kollyboo sits at the centre of our hometown and presses clothes using the embers of a fire to provide heat for her iron. She’s been there for decades and her open smile as she fans the flames inspired us to create this combination of pinks and reds using a traditional pattern.

Empty gourds with little wooden hats are strung together across wooden frames. The world’s best xylophones, and the best xylophone players, come from our hometown Lawra in Ghana. Fact. The hypnotic tunes have a central theme but sound like mellifluous babbling brooks, and they take years of apprenticeship and dedication to understand and learn.

First light reveals the women of the household, usually with a broom made of grasses in their hand, sweeping and cleaning as the inky blue-black of the African night gives way to the first rays and filtering white light of a brand new day.

The Big Event of our year is the harvest festival celebrations in our hometown. Everyone dresses up to the nines, and dance troupes from right across Ghana gather to out-perform each other. Village chiefs from all around line up to make speeches, relatives return from far flung places, and everyone enjoys an enormous two-day party.

A smock with bold stripes is typically worn by our chief, or ‘naa’, and not just for special occasions but for everyday wear too. We’ve created this striking pattern in his honour.

Legend has it that the first Dagaaba man to settle in modern Lawra in Ghana was a man named Kontol. He crossed the river from what is now Burkina Faso in pursuit of wildlife. After a while he stopped as he felt thirsty. Finding no streams or lakes to quench his thirst he followed the tracks of the wildlife as their hooves and paws left dotted red and pink tracks in the red earth of the bleached white vegetation of the savannah, and this led him to a water hole where he founded our hometown, Lawra.

Edith barbeques and sells corn on the cob by the road. Behind her is the field where her stands of her corn grow and wave against the blue sky. From field to grill to eager mouths. Edith’s corn is legendary in our hometown of Lawra.

Please email us for samples and prices, and any further information.

Join the Boon & Up family to receive news and special offers 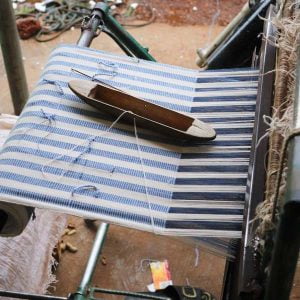